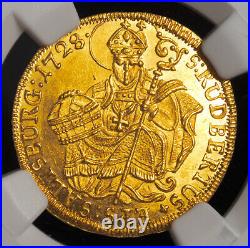 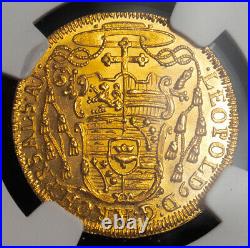 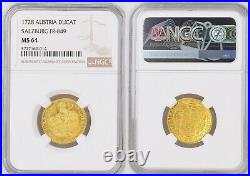 1728, Salzburg, Leopold Anton Freiherr von Firmian. Mint Year: 1728 Mint Place: Salzburg Denomination: Gold Ducat Reference: Friedberg 849, KM-323. Certified and graded by NGC as MS-64! 986 Weight: 3.52gm. Obverse: Saint Rupert, wearing episcopal regalia, holding crozier and salt barrel. S : RUDBERTUS EPS : SALISBURG : 1728 Reverse: Tasseled papal legate´s hat above cross-topped coat-of-arms. LEOPOLD9 D: G: ARCH. The Archbishopric of Salzburg was an ecclesiastical state of the Holy Roman Empire, roughly consisting of the present-day state of Salzburg (the ancient Roman city of Iuvavum) in Austria. Since 1648, the Archbishop of Salzburg has also borne the title Primas Germaniae (“First [Bishop] of Germania”). The powers of this title – now non-jurisdictional – are limited to being the Pope’s first correspondent in the German-speaking world, but used to include the right to summon the Prince-electors. The Archbishop also has the title of legatus natus (“permanent legate”) to the Pope, which, although not a cardinal, gives the Archbishop the privilege of wearing a cardinal’s scarlet vesture, even in Rome. Leopold Anton Freiherr von Firmian or Leopold Anton Eleutherius von Firmian (Munich, 11 March 1679 – Salzburg, 22 October 1744) was a Catholic Prince Archbishop of Salzburg. He was born, on his father’s side, to the aristocratic family of the Tyrol, also known as Count Firmian , by virtue of being the son of the Contessa Maria Viktoria von Thun and the imperial envoy and Baron of Firmian, Franz William von Firmian. He was the uncle of cardinal Leopold Ernst von Firmian, also prince-bishop of Passau. His nephew, Karl Joseph von Firmian, the Austrian plenipotentiary minister in Milan, was renowned as a patron of the arts, including poets such as Giuseppe Parini, musicians such as Johann Ernst Eberlin and painters such as Giambettino Cignaroli. While Leopold Anton was an early patron of Leopold Mozart; the nephew, count Karl Firmian appears to have been one of the patrons for Amadeus Mozart’s opera in Milan: Mitridate, Re di Ponto circa 1770. On a darker note, on October 31, 1731, the 214th anniversary of Martin Luther’s nailing of his 95 Theses to the Wittenberg School door, Archbishop Count Leopold Anton von Firmian signed an Edict of Expulsion of Protestants declaring that all Protestants in the bishopric of Salzburg recant their non-Catholic beliefs or be banished within days. To Count Firmian’s surprise, over 20 thousand citizens professed Protestant beliefs, and were exiled. The item “1728, Salzburg, Leopold Anton Freiherr von Firmian. Gold Ducat Coin. NGC MS-64″ is in sale since Tuesday, June 1, 2021. This item is in the category “Coins & Paper Money\Coins\ World\Europe\Austria”. The seller is “coinworldtv” and is located in Wien. This item can be shipped worldwide.