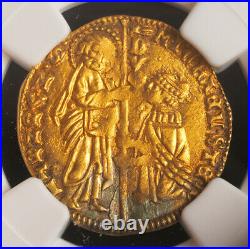 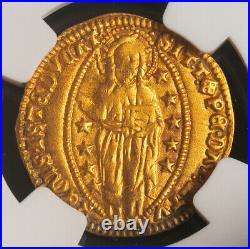 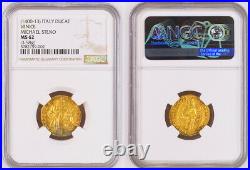 1400, Doges of Venice, Michele Steno. Certified by NGC as MS-62! Denomination: Zecchino (Venetian Ducat) Reference: Gamberini 137, Friedberg 1320. Diameter: 20mm Weight: 3.58gm Material: Gold! Mark standing right, presenting cross topped banner. Legend: MICHAEL STEN. VENETI Reverse: Christ standing facing, raising hand in benediction and holding Gospels. Halo of light (mandorla) with 9 stars around! Legend: SIT T XPE DAT Q TV – REGIS ISTE DVCAT. In Venetian Language; 1331 December 26, 1413 was a Venetian statesman who served as the 63rd Doge of Venice from December 1, 1400 until his death. Steno was born in Venice into a family of some, though not great, wealth, and had lived a dissolute life in youth; he and a number of other young men were at one point were nearly executed by the government for covering the Doge Marino Faliero’s throne with “ignominious” inscriptions against him and his spouse, Marina Gallina. He later served as proveditor of Venice, and proved a capable diplomat. In 1400 he was elected as doge as a compromise choice, since previous votes had become deadlocked. Upon becoming Doge he took to dressing like Lorenzo Celsi, who had been known for his elegance of dress. In his accession’s year, Venice begun a successful war against Padua and its lord, Francesco da Carrara, leading to a substantial expansion of the republic in the Italian mainland. During the Christian schism of 1408, Venice sided with Pope Alexander V. An old and ill man in his late years, Steno died in 1413, and was interred in the Basilica di San Giovanni e Paolo, a traditional burial place of the doges. Steno was succeeded as Doge by Tommaso Mocenigo. Michele Steno is honored as the dedicatee of Johannes Ciconia’s motet, “Venecia, mundi splendor/Michael, qui Stena domus, ” probably on the occasion of Padua’s submission to Venetian rule. Among other rhetorical flourishes, the text praises Michele for his celibate life. The item “1400, Doges of Venice, Michele Steno. Gold Zecchino Ducat. (3.58gm!) NGC MS-62″ is in sale since Monday, September 6, 2021. This item is in the category “Coins & Paper Money\Coins\ World\Europe\Italy, San Marino, Vatican\Italian States (up to 1861)”. The seller is “coinworldtv” and is located in Wien. This item can be shipped worldwide. 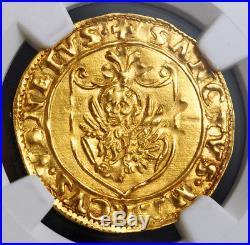 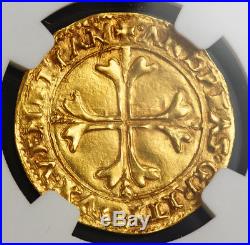 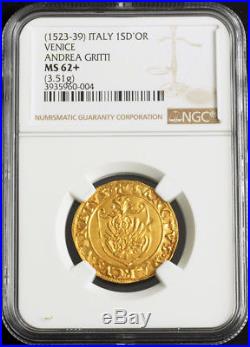 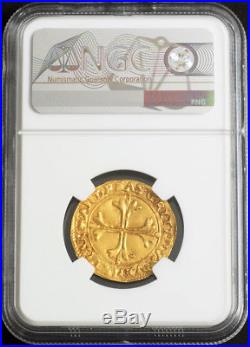 1523, Doges of Venice, Andrea Gritti. Rare Gold Scudo Coin. Certified and graded by NGC as MS62+. Reference: Friedberg 1448, Paolucci 3, KM-MB54. Weight: 3.51gm Material: Gold. Obverse: Ornate shield with arms of Venice (nimbate lion of Saint Mark) within inner circle. Reverse: Christ standing facing, raising hand in benediction and holding Gospels with five pellets. Halo of light (mandorla) with 8 stars around dot below Jesus´ feet! Andrea Gritti (1455 – 1538) was the 77th Doge of Venice from 1523 to 1532, following a distinguished diplomatic and military career. Gritti was born in Bardolino, near Verona. He spent much of his early life in Constantinople, looking after Venetian interests. In 1499, he was imprisoned on charges of espionage, but escaped execution due to his friendship with the vizier, and was released several years later. In the early sixteenth century Venice lost nearly all its territory on the Italian mainland, and Gritti played an important part in the events connected with this loss and the eventual return to the. In 1509, after the Venetian defeat at the Battle of Agnadello, Gritti was appointed as proveditor to the Venetian army in Treviso; ordered by the Council of Ten to support revolts against the invaders, he successfully engineered the return of Padua to Venetian hands, and its subsequent defence against the Emperor. In 1510, following the death of Nicolo di Pitigliano, Gritti took command of Venice’s army, but was forced to withdraw to Venice by French advances. He continued as proveditor through end of the League of Cambrai and the subsequent war of the Holy League. In 1512, he led the negotiations with Francis I that resulted in Venice leaving the League and allying with France. Elected Doge in 1523, Gritti concluded a treaty with Charles V, ending Venice’s active involvement in the Italian Wars. He attempted to maintain the neutrality of the Republic in the face of the continued struggle between Charles and Francis, urging both to turn their attention to the advances of the Ottoman Empire in Hungary. However, he could not prevent Suleiman I from attacking Corfu in 1537, drawing Venice into a war with the Ottomans. He died in 1538. The item “1523, Doges of Venice, Andrea Gritti. Beautiful Gold Scudo Coin. NGC MS62+” is in sale since Tuesday, October 2, 2018. This item is in the category “Coins & Paper Money\Coins\ World\Europe\Italy, San Marino, Vatican\Italian States (up to 1861)”. The seller is “coinworldtv” and is located in Europe. This item can be shipped worldwide.