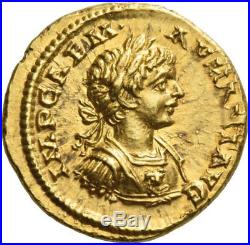 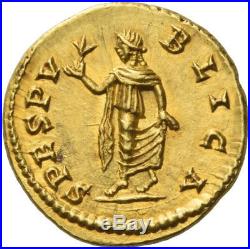 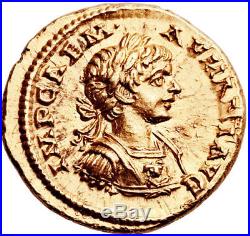 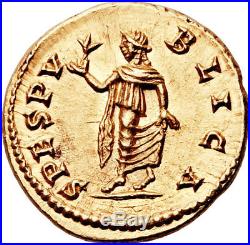 Caracalla – Roman Emperor: 198-217 A. Gold Aureus (7.13 grams) Laodicea ad Mare mint, struck 198 A. Reference: C 598 var. (different bust and legend). BMC 646 and pl. 43, 18 (these dies). Calicó 2821 (this coin). Pedigree / Provenance : Ex Egger 20 April 1904, 194 ; Sothebys November 1986, Deceased nobleman, 106; NFA XX 1988, 271; NFA 29, 1992, 390;Sothebys 1993, 106 and Heritage 3032, 2014, 23621 sales. From the Andre Constantine Dimitriadis and the Retired Banker collections. Certification: NGC (photo-certificate) Choice MS 5/5 – 5/5, Fine Style. IMP CAE M AVR ANT AVG, Laureate bust right, wearingcuirass decorated with aegis. SPES PVBLICA, Spes advancing left, holding flower and raising skirt. It was a special honour for a subsidiary imperial mint to strike in gold, and this remarkable aureus of Caracalla was struck at the branch mint of Laodicea in Syria, where the imperial family had resided during war against Pescennius Niger in A. At the time this coin was struck in A. 198, Severus along with his family was again in the East, having just waged a successful war against the Parthians in retaliation for their invasion of Roman territory while he was in Gaul eliminating his final adversary, Clodius Albinus. He sacked the city of Ctesiphon, and after enslaving the population and carrying off much booty which it should be noted is the likely source of the gold that was used to strike this coin he took the title Parthicus Maximus. He also elevated the positions of both his sons: Caracalla, his eldest son, was promoted from the rank of caesar to augustus, and Geta, his youngest son, was given the title of caesar. The obverse of this aureus, which belongs to one of the first issues struck for Caracalla as emperor, shows the youthful emperor wearing a cuirass or breastplate centrally embossed with the figure of a gorgoneion. The gorgoneion is often depicted as part of the aegis, a tasseled animal skin thought to be ageless and which extended an aura of immortality to the wearer. As part of the emperor’s armour its obvious purpose would have been to serve as a protective amulet during battle. The reverse depicts the goddess Spes, the personification of hope, and here expresses the stability that the Severan dynasty represents for an empire having just suffered several years of civil war. In Antioch on January 1, A. The family’s reception once back in the capital was attended with much fanfare. Rome had not only conquered its implacable enemy, Parthia, but Severus celebrated his decennalia with many festivities, including of course generous donatives to the people and the praetorian guardsmen, each of whom received ten gold aurei according to Dio Cassius. (under Septimius Severus) Augustus: 198-217 A. With Septimius Severus 209-211 A. With Septimius Severus and Geta 211 A. With Geta 211-217 A. Caracalla (4 April 188 – 8 April 217), formally Marcus Aurelius Severus Antoninus Augustus , was Roman emperor from AD 198 to 217. A member of the Severan Dynasty, he was the eldest son of Septimius Severus and Julia Domna. Caracalla reigned jointly with his father from 198 until Severus’ death in 211. Caracalla then ruled jointly with his younger brother Geta, with whom he had a fraught relationship, until he had Geta murdered later that year. Caracalla’s reign was marked by domestic instability and external invasions from the Germanic people. Caracalla’s reign was notable for the Antonine Constitution (Latin: Constitutio Antoniniana), also known as the Edict of Caracalla , which granted Roman citizenship to nearly all freemen throughout the Roman Empire. The edict gave all the enfranchised men Caracalla’s adopted praenomen and nomen: “Marcus Aurelius”. Domestically, Caracalla was known for the construction of the Baths of Caracalla, which became the second-largest baths in Rome, for the introduction of a new Roman currency named the antoninianus , a sort of double denarius , and for the massacres he enacted against the people of Rome and elsewhere in the empire. Towards the end of his rule, Caracalla began a campaign against the Parthian Empire. He did not see this campaign through to completion due to his assassination by a disaffected soldier in 217. He was succeeded as emperor by Macrinus after three days. Caracalla is presented in ancient sources as a tyrant and cruel leader, an image that has survived into modernity. Dio Cassius and Herodian present Caracalla as a soldier first and emperor second. In the 12th century, Geoffrey of Monmouth started the legend of Caracalla’s role as the king of Britain. Later, in the 18th century, Caracalla’s memory was revived in the works of French artists due to the parallels between Caracalla’s apparent tyranny and that of King Louis XVI. Modern works continue to portray Caracalla as a psychopathic and evil ruler. His rule is remembered as being one of the most tyrannical of all Roman emperors. The item “CARACALLA Authentic Ancient 198AD NGC Certified Choice MS Gold Aureus Coin” is in sale since Friday, October 5, 2018. This item is in the category “Coins & Paper Money\Coins\ Ancient\Roman\ Imperial (27 BC-476 AD)”. The seller is “victoram” and is located in Forest Hills, New York. This item can be shipped worldwide.