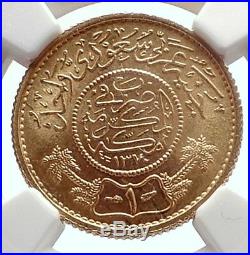 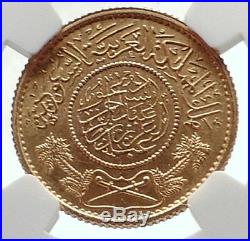 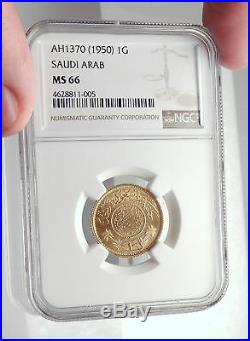 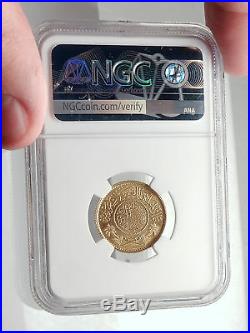 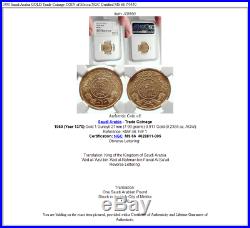 Item: i70550 Authentic Coin of. Trade Coinage 1950 (Year 1370) Gold 1 Gunayh 21mm (7.99 grams) 0.917 Gold 0.2355 oz. AGW Reference: KM# 36: Fr# 1 Certification: NGC. MS 66 4628811-005 Obverse Lettering: Translation: King of the Kingdom of Saudi Arabia’Abd al-‘Aziz bin’Abd al-Rahman bin Faisal Al Sa’ud Reverse Lettering: Translation: One Saudi Arabian Pound Struck in the Holy City of Mekka 1370 1. Saudi Arabia , officially the Kingdom of Saudi Arabia (KSA), is a sovereign Arab state in Western Asia constituting the bulk of the Arabian Peninsula. With a land area of approximately 2,150,000 km. (830,000 sq mi), Saudi Arabia is geographically the fifth-largest state in Asia and second-largest state in the Arab world after Algeria. Saudi Arabia is bordered by Jordan and Iraq to the north, Kuwait to the northeast, Qatar, Bahrain and the United Arab Emirates to the east, Oman to the southeast and Yemen to the south. It is separated from Israel and Egypt by the Gulf of Aqaba. It is the only nation with both a Red Sea coast and a Persian Gulf coast and most of its terrain consists of arid desert droughts and mountains. The area of modern-day Saudi Arabia formerly consisted of four distinct regions: Hejaz, Najd and parts of Eastern Arabia (Al-Ahsa) and Southern Arabia (‘Asir). The Kingdom of Saudi Arabia was founded in 1932 by Ibn Saud. He united the four regions into a single state through a series of conquests beginning in 1902 with the capture of Riyadh, the ancestral home of his family, the House of Saud. Saudi Arabia has since been an absolute monarchy, effectively a hereditary dictatorship governed along Islamic lines. The ultraconservative Wahhabi religious movement within Sunni Islam has been called “the predominant feature of Saudi culture”, with its global spread largely financed by the oil and gas trade. Saudi Arabia is sometimes called “the Land of the Two Holy Mosques” in reference to Al-Masjid al-Haram (in Mecca) and Al-Masjid an-Nabawi (in Medina), the two holiest places in Islam. As of 2013, the state had a total population of 28.7 million, of which 20 million were Saudi nationals and 8 million were foreigners. As of 2017, the population is 33 million. The state’s official language is Arabic. Petroleum was discovered on 3 March 1938 and followed up by several other finds in the Eastern Province. Saudi Arabia has since become the world’s largest oil producer and exporter, controlling the world’s second largest oil reserves and the sixth largest gas reserves. The kingdom is categorized as a World Bank high-income economy with a high Human Development Index and is the only Arab country to be part of the G-20 major economies. However, the economy of Saudi Arabia is the least diversified in the Gulf Cooperation Council, lacking any significant service or production sector (apart from the extraction of resources). The state has attracted criticism for its treatment of women and use of capital punishment. Saudi Arabia is considered a regional and middle power. In addition to the GCC, it is an active member of the Organisation of Islamic Cooperation and OPEC. World-renowned expert numismatist, enthusiast, author and dealer in authentic ancient Greek, ancient Roman, ancient Byzantine, world coins & more. Ilya Zlobin is an independent individual who has a passion for coin collecting, research and understanding the importance of the historical context and significance all coins and objects represent. Send me a message about this and I can update your invoice should you want this method. Getting your order to you, quickly and securely is a top priority and is taken seriously here. Great care is taken in packaging and mailing every item securely and quickly. What is a certificate of authenticity and what guarantees do you give that the item is authentic? You will be very happy with what you get with the COA; a professional presentation of the coin, with all of the relevant information and a picture of the coin you saw in the listing. Additionally, the coin is inside it’s own protective coin flip (holder), with a 2×2 inch description of the coin matching the individual number on the COA. Whether your goal is to collect or give the item as a gift, coins presented like this could be more prized and valued higher than items that were not given such care and attention to. When should I leave feedback? Please don’t leave any negative feedbacks, as it happens sometimes that people rush to leave feedback before letting sufficient time for their order to arrive. The matter of fact is that any issues can be resolved, as reputation is most important to me. My goal is to provide superior products and quality of service. How and where do I learn more about collecting ancient coins? Visit the Guide on How to Use My Store. For on an overview about using my store, with additional information and links to all other parts of my store which may include educational information on topics you are looking for. The item “1950 Saudi Arabia GOLD Trade Coinage COIN of Mecca NGC Certified MS 66 i70550″ is in sale since Friday, July 6, 2018. This item is in the category “Coins & Paper Money\Coins\ World\Middle East\Saudi Arabia”. The seller is “highrating_lowprice” and is located in Rego Park, New York. This item can be shipped worldwide. 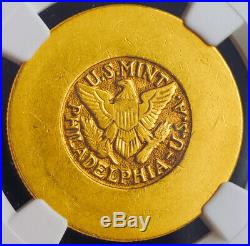 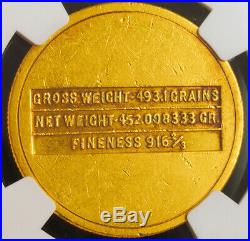 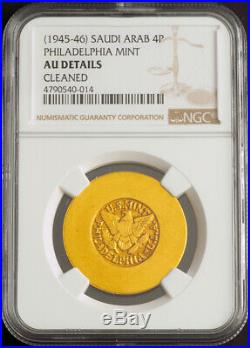 Gold Saud 4 Pounds (Quadruple Sovereign) Coin. Denomination: Gold Saund 4 Pounds (Quadruple Sovereign) Condition. Certified and graded by NGC as AU details: cleaned! 917 Weight: 31.95gm. Obverse: American heraldic eagle with US shield at chest, olive spray in right claw thunderbolts in right claw. Legend: PHILADELPHIA – U. Reverse: Incuse table with three lines of text showing gold content. Legend: GROSS WEIGHT – 493.1 GRAINS / NET WEIGHT. / FINENESS 916 2/3. The standard catalogue of world coins mentions, that most of these were melted into bullion. , officially the Saudi Arabian Oil Company , most popularly known as Aramco is a Saudi Arabian national petroleum and natural gas company based in Dhahran, Saudi Arabia. Making it the world’s most valuable company. Saudi Aramco has both the largest proven crude oil reserves, at more than 260 billion barrels (4.1×1010 m3), and largest daily oil production. Headquartered in Dhahran, Saudi Arabia, Saudi Aramco operates the world’s largest single hydrocarbon network, the Master Gas System. Its yearly production is 3.479 billion barrels (553,100,000 m3), and it managed over 100 oil and gas fields in Saudi Arabia, including 284.8 trillion standard cubic feet (scf) of natural gas reserves. Saudi Aramco owns the Ghawar Field, the world’s largest oil field, and the Shaybah Field, another one of the world’s largest oil fields. Saudi Aramco’s origins trace to the oil shortages of World War I and the exclusion of American companies from Mesopotamia by the San Remo Petroleum Agreement of 1920. The US Republican administration had popular support for an’Open Door’ policy, which Herbert Hoover, secretary of commerce, initiated in 1921. Standard Oil of California (SoCal) was among those US companies actively seeking new sources of oil from abroad. SoCal through its subsidiary company, the Bahrain Petroleum Co. (BAPCO), struck oil on Bahrain in May 1932. This event heightened interest in the oil prospects of the Arabian mainland. The concession allowed Socal to explore for oil in Saudi Arabia. SoCal assigned this concession to a wholly owned subsidiary called California-Arabian Standard Oil Co. In 1936, with the company having had no success at locating oil, the Texas Oil Co. After four years of fruitless exploration, the first success came with the seventh drill site in Dhahran in 1938, a well referred to as. This well immediately produced over 1,500 barrels per day (240 m3/d), giving the company confidence to continue. On 31 January 1944, the company name was changed from California-Arabian Standard Oil Co. To Arabian American Oil Co. The newcomers were also shareholders in the Iraq Petroleum Co. And had to get the restrictions of the Red Line Agreement lifted in order to be free to enter into this arrangement. In 1950, King Abdulaziz threatened to nationalize his country’s oil facilities, thus pressuring Aramco to agree to share profits 50/50. A similar process had taken place with American oil companies in Venezuela a few years earlier. In the wake of the new arrangement, the company’s headquarters were moved from New York to Dhahran. In 1973, following US support for Israel during the Yom Kippur War, the Saudi Arabian government acquired a 25% stake in Aramco. It increased its shareholding to 60% by 1974, and finally took full control of Aramco by 1980, by acquiring a 100% percent stake in the company. Aramco partners continued to operate and manage Saudi Arabia’s oil fields. In November 1988, a royal decree changed its name from Arabian American Oil Co. To Saudi Arabian Oil Co. (or Saudi Aramco) and took the management and operations control of Saudi Arabia’s oil and gas fields from Aramco and its partners. It officially cut all oil supply to Israel the same year by order of the CEO. Following the events that unfolded in 1988, Saudi Aramco became a fully owned, privately held company. The item “1946, Saudi Arabia. Gold Saud 4 Pounds (Quadruple Sovereign) Coin. NGC AU+” is in sale since Monday, June 3, 2019. This item is in the category “Coins & Paper Money\Coins\ World\Middle East\Saudi Arabia”. The seller is “coinworldtv” and is located in Europe. This item can be shipped worldwide.