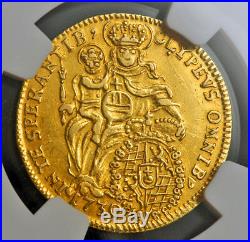 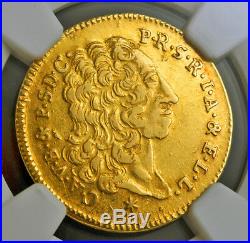 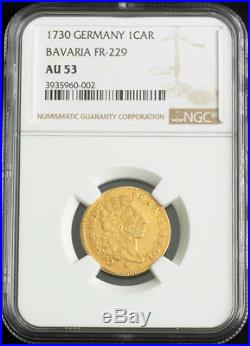 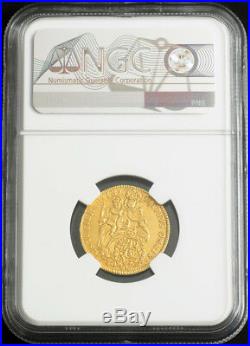 1730, Bavaria, Charles VII Albert. Beautiful Gold ½ Carolin Coin. Mint year: 1730 Mint Place: Munich. Certified and graded by NGC as AU-53! The slab says 1 Carolin, which is of course wrong! The slab says 229, which is wrong! 770 Weight: 4.85gm. Obverse: Bust of Charles Albert (the later Emperor Charles VII) as Prince-elector of Bavaria right. Reverse: The Virgin (Madonna), holding scepter and baby-Jesus child in right hand and supporting crowned arms of the Electorate to her left. Legend: + CLYPEVS OMNIB9 (1730) IN TE SPERANTIB9. A shield to all who hope in thee! – Psalms 18:31. Charles VII Albert (6 August 1697 – 20 January 1745) a member of the Wittelsbach family, was Prince-elector of Bavaria from 1726 and Holy Roman Emperor from 24 January 1742 until his death in 1745. Charles was notably the only person not of the House of Habsburg to become emperor since the 15th century. He was born in Brussels as the son of Maximilian II Emanuel, Elector of Bavaria, and Theresa Kunegunda Sobieska, and the grandson of Polish King John III Sobieski. His family was split during the War of the Spanish Succession and was for many years under house arrest in Austria. Only in 1715 did the family become re-united. From 3 December 1715 until 24 August 1716 Charles visited Italy and in 1717 he joined the war of the Habsburgs against the Turks with Bavarian auxiliaries. On 5 October 1722, Charles married Marie Amalie, Archduchess of Austria. Marie Amalie was a daughter of Joseph I, Holy Roman Emperor and his wife Princess Wilhelmina Amalia of Brunswick-Lueneburg. Her maternal grandfather was John Frederick, Duke of Brunswick-Lueneburg. In 1725 Charles Albert visited Versailles for the wedding of Louis XV and established a firm contact to France. In 1726 when his father died Charles Albert became Prince-elector of the Holy Roman Empire and Duke of Bavaria. He managed to maintain good relations with his Habsburg relatives but also with France. In continuance of the policy of his father Charles Albert aspired to an even higher rank. As son-in-law of Joseph I, Holy Roman Emperor, Charles Albert rejected the Pragmatic Sanction of 1713 and claimed the German territories of the Habsburg dynasty after the death of Charles VI in 1740. With the treaty of Nymphenburg concluded in July 1741, Charles Albert allied with France and Spain against Austria. During the War of the Austrian Succession Charles Albert invaded Upper Austria in 1741 and planned to conquer Vienna but his allied French troops were redirected to Bohemia instead. So Charles Albert was crowned King of Bohemia in Prague (9 December 1741) when the Habsburgs were still not defeated. He was elected’King of the Romans’ on 24 January 1742, and took the title’Holy Roman Emperor’ upon his coronation on 12 February 1742. His brother Klemens August of Bavaria, archbishop and elector. Of Cologne, who mostly sided with the Austria Habsburg-Lorraine side during the Habsburg successions, cast his vote for him and personally crowned him emperor at Frankfurt. Charles VII was the second Wittelsbach Emperor after Louis IV and the first Wittelsbach King of the Romans since the rule of Rupert of Germany. Shortly after the coronation most of Charles Albert’s territories were overrun by the Austrians and Bavaria was occupied by the troops of Maria Theresa. Therefore the emperor fled Munich and resided for almost three years in the. He was made mockery of, since he was an emperor that neither controlled his own realm, nor was in effective control of the empire itself, though the institution of the Holy Roman Emperor has largely become symbolic in nature and powerless by this time. A popular saying about him in Latin was. Et Caesar et nihil. Meaning “as well Emperor, as nothing”, playing words on. Aut Caesar aut nihil. “Either Emperor or nothing”. Charles Albert’s general Ignaz Felix Count of Tärring-Jettenbach was compared with a drum, as people. Heard about him only when he was beaten. But Charles VII tried to accentuate his government in Frankfurt with numerous legal acts such as the imperial privileg for the University of Erlangen in 1743 and the elevation of several members of the gentry to peers of the Empire. Charles Eugene, Duke of Wuerttemberg was declared full age ahead of time in 1744. The new commander of the Bavarian army, Friedrich Heinrich von Seckendorff fought Austria by a series of battles in 1743 and 1744. The new alliance with Frederick II of Prussia during the Second Silesian War finally forced the Austrian army to leave Bavaria and to retreat back into Bohemia. In October 1744 Charles VII reobtained Munich. His brother Klemens August then again leaned toward Austria and also his son and successor Maximilian III Joseph made peace with Austria. With the Treaty of Fuessen Austria recognized the legitimacy of Charles VII’s election as Holy Roman Emperor. Charles Albert is buried in the crypt of the Theatinerkirche in Munich. Charles Albert’s reign was the peak of the era of Bavarian rococo. Francois de Cuvillies was appointed chief architect of the court and constructed also the Amalienburg. The Nymphenburg Palace was completed during his rule, the grand circle the. With baroque mansions, was constructed as initial point for a new city. Which was finally not realized. For the Munich Residence Charles Albert ordered to erect the Ancestral Gallery and the Ornate Rooms. He also ordered Cuvillies to construct the Palais Holnstein for one of his mistress, the Countess Holnstein. Among the most gifted Bavarian artists of his time, were Johann Michael Fischer, Cosmas Damian Asam and Egid Quirin Asam, Johann Michael Feuchtmayer, Matthäus Guenther, Johann Baptist Straub and Johann Baptist Zimmermann. The item “1730, Bavaria, Charles VII Albert. Beautiful Gold ½ Carolin Coin. NGC AU-53″ is in sale since Tuesday, February 26, 2019. This item is in the category “Coins & Paper Money\Coins\ World\Europe\Germany\German States (up to 1871)”. The seller is “coinworldtv” and is located in Wien. This item can be shipped worldwide.