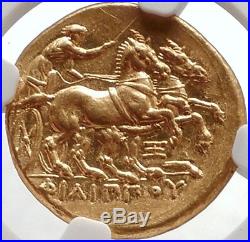 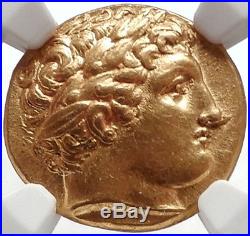 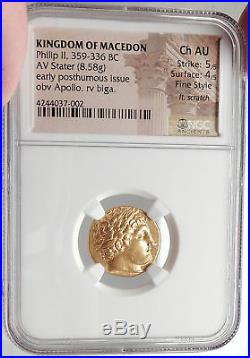 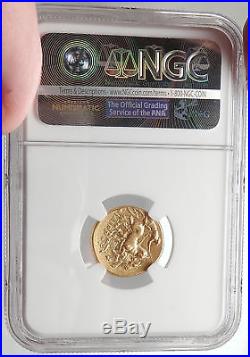 [6598] Kingdom of Macedonia Philip II – King: 359-336 B. (Father of Alexander III the Great) Gold Stater (19mm, 8.58 gm, 4h). Posthumous issue of Abydus mint, struck circa 323-319 B. Reference: Thompson, ADM II, 88-89. SNG ANS 298 Certification: NGC Ancients Ch AU Strike: 5/5 Surface: 4/5 Fine Style 4244037-002 Laureate head of Apollo right. Charioteer, holding kentron and reins, driving racing biga right; below, IIOY in exergue. Provided with certificate of authenticity. CERTIFIED AUTHENTIC by Sergey Nechayev, PhD – Numismatic Expert. Philip II of Macedon (382-336 BC) was the king (Basileus) of the Ancient Greek kingdom of Macedon from 359 BC until his assassination in 336 BC. He was a member of the Argead dynasty of Macedonian kings, the third son of King Amyntas III, and father of Alexander the Great and Philip III. The rise of Macedon during the reign of Philip II was achieved in part by his reformation of the Ancient Macedonian army, establishing the Macedonian phalanx that proved critical in securing victories on the battlefield. After defeating Athens and Thebes at the Battle of Chaeronea in 338 BC, Philip II led the effort to establish a federation of Greek states known as the League of Corinth, with him as the elected hegemon and commander-in-chief of a planned invasion of the Achaemenid Empire of Persia. However, his assassination led to the immediate succession of his son Alexander, who would go on to invade the Achaemenid Empire in his father’s stead. The item “PHILIP II Father of Alexander the Great Ancient 323BC Gold Stater Greek Coin NGC” is in sale since Wednesday, January 17, 2018. This item is in the category “Coins & Paper Money\Coins\ Ancient\Greek (450 BC-100 AD)”. The seller is “victoram” and is located in Forest Hills, New York. This item can be shipped worldwide.