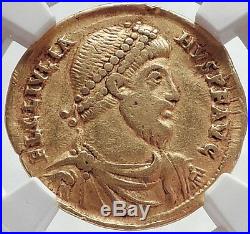 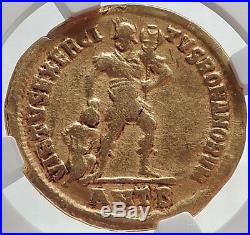 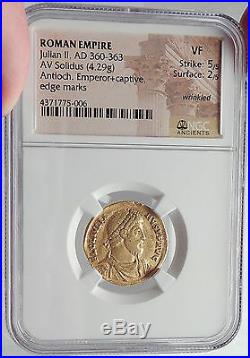 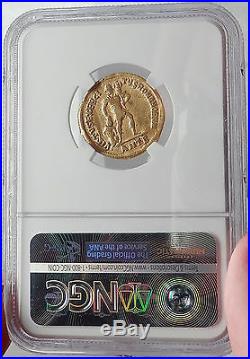 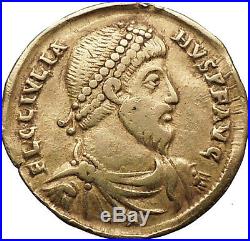 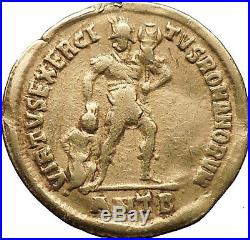 [6560] JULIAN II’the Apostate’ or Philosopher, 361-363 A. Gold Solidus 22mm, 4.29gm. Fine style and Very Rare. RIC 195, Depeyrot 15/2 Certification: NGC Ancients VF Strike: 5/5 Surface: 2/5 4371775-006 FL CL IVULIA- NVS PF AVG, Diademed, draped and cuirassed bust right. VIRTVS EXERCI -TVS ROMANORVM, Helmeted soldier standing right, head left, holding trophy and placing other hand on crouching captive. Flavius Claudius Julianus , known also as Julian , Julian the Apostate or Julian the Philosopher (331/332 – 26 June 363, Greek:), was Roman Emperor (Caesar, November 355 to February 360; Augustus, February 360 to June 363), last of the Constantinian dynasty. Julian was a man of “unusually complex character”: he was “the military commander, the theosophist, the social reformer, and the man of letters”. Julian was the last non-Christian ruler of the Roman Empire and it was his desire to bring the empire back to its ancient Roman values in order to save it from “dissolution”. He purged the top-heavy state bureaucracy and attempted to revive traditional Roman religious practices at the cost of Christianity. His rejection of Christianity in favour of Neo-Platonic paganism caused him to be called Julian the Apostate by the church, as Edward Gibbon wrote. In 363, after a reign of only 19 months as absolute ruler of the Roman Empire, Julian died in Persia during a campaign against the Sassanid Empire. Flavius Claudius Julianus, born in May or June 332 or 331 in Constantinople, was the son of Julius Constantius (consul in 335), half brother of Emperor Constantine I, and his second wife, Basilina, both Christians. His paternal grandparents were Western Roman Emperor Constantius Chlorus and his second wife, Flavia Maximiana Theodora. His maternal grandfather was Julius Julianus, praetorian prefect of the East under emperor Licinius from 315 to 324 and consul after 325. The name of Julian’s maternal grandmother is unknown. In the turmoil after the death of Constantine in 337, in order to establish himself as sole emperor, Julian’s zealous Arian Christian cousin Constantius II led a massacre of Julian’s family. Constantius II ordered the murders of many descendants from the second marriage of Constantius Chlorus and Theodora, leaving only Constantius and his brothers Constantine II and Constans I, and their cousins, Julian and Gallus (Julian’s half-brother), as the surviving males related to Emperor Constantine. Constantius II, Constans I, and Constantine II were proclaimed joint emperors, each ruling a portion of Roman territory. Julian and Gallus were excluded from public life and given a strictly Arian Christian education. Initially growing up in Bithynia, raised by his maternal grandmother, at the age of seven he was under the guardianship of Eusebius of Nicomedia, the semi-Arian Christian Bishop of Nicomedia, and taught by Mardonius, a Gothic eunuch, whom Julian wrote warmly of later. After Eusebius died in 342, both Julian and Gallus were exiled to the imperial estate of Macellum in Cappadocia. Here Julian met the Christian bishop George of Cappadocia, who lent him books from the classical tradition. At the age of 18, the exile was lifted and he dwelt briefly in Constantinople and Nicomedia. He became a lector, a minor office in the Christian church, and his later writings show a detailed knowledge of the Bible, likely acquired in his early life. Looking back on his life in 362, Julian wrote, in his thirty-first year, that he had spent twenty years in the way of Christianity and twelve in the true way (ie the way of Helios). Julian studied Neoplatonism in Asia Minor in 351, at first under Aedesius, the philosopher, and then Neoplatonic theurgy from Aedesius’ student, Maximus of Ephesus. He was summoned to Constantius’ court in Milan in 354 and kept there for a year; in the summer and fall of 355, he was permitted to study in Athens. While there, Julian became acquainted with two men who later became both bishops and saints: Gregory of Nazianzus and Basil the Great; in the same period, Julian was also initiated into the Eleusinian Mysteries, which he would later try to restore. Constantine II died in 340 when he attacked his brother Constans. Constans in turn fell in 350 in the war against the usurper Magnentius. This left Constantius II as the sole remaining emperor. In need of support, in 351 he made Julian’s half-brother, Gallus, Caesar of the East, while Constantius II himself turned his attention westward to Magnentius, whom he defeated decisively that year. In 354 Gallus, who had imposed a rule of terror over the territories under his command, was executed. Julian was summoned to court, and held for a year, under suspicion of treasonable intrigue, first with his brother and then with Claudius Silvanus; he was cleared, in part because the Empress Eusebia intervened on his behalf, and he was sent to Athens. Julian expresses his gratitude to the empress Eusebia in his third oration. The item “JULIAN II the Apostate Philosopher 361AD Ancient Roman Gold Solidus Coin NGC VF” is in sale since Tuesday, August 8, 2017. This item is in the category “Coins & Paper Money\Coins\ Ancient\Roman\ Imperial (27 BC-476 AD)”. The seller is “victoram” and is located in Forest Hills, New York. This item can be shipped worldwide. 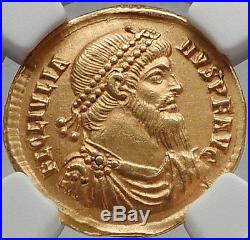 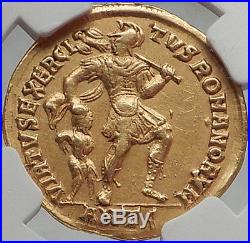 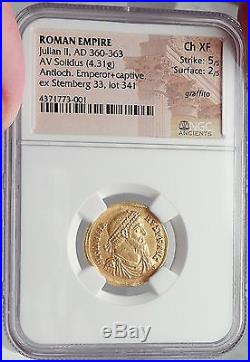 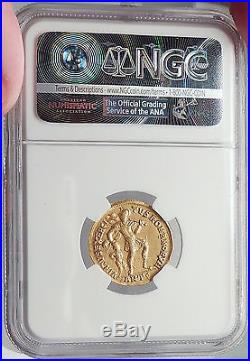 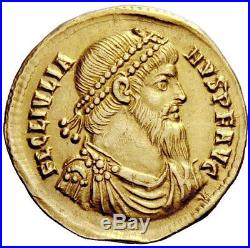 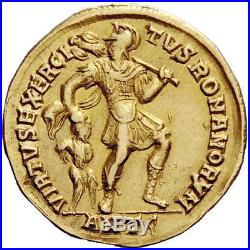 [6500] Julian II’The Apostate’ – Roman Emperor: 360-363 A. Gold Solidus, (4.31 grams) Antiochia 361-363 A. Certification: NGC Ancients Ch XF Strike: 5/5 Surface: 2/5 4371773-002 Pedigree: Ex Sternberg XXXIII, 1997, 341 sales. FL CL IVLIA – NVS P F AVG Pearl-diademed, draped and cuirassed bust right. VIRTVS EXERCI – TVS ROMANORVM Soldier, helmeted, standing right holding trophy over left shoulder and placing right hand on head of kneeling captive; in exergue, ANT. Julian was an extraordinary character. As a monarch he was indefatigable in his attention to business, upright in his administration, and comprehensive in his views; as a man, he was virtuous, in the midst of a profligate age, and did not yield to the luxurious temptations to which he was exposed. In consequence of his apostasy he has been smeared by Christian writers; but for the same reason he has been unduly extolled by heathen authors. He wrote a large number of works, many of which survive. Provided with certificate of authenticity. CERTIFIED AUTHENTIC by Sergey Nechayev, PhD – Numismatic Expert. Julian II’The Apostate’ – Roman Emperor: 360-363 A. Caesar: 355-360 (under Constantius II) Augustus: 360-361 A. (as Rival of Constantius II) Sole Reign: 361-363 A. Julian (Latin: Flavius Claudius Iulianus Augustus, 331/332 – 26 June 363), also known as Julian the Apostate , was Roman Emperor from 361 to 363, as well as a notable philosopher and author in Greek. A member of the Constantinian dynasty, Julian became Caesar over the western provinces by order of Constantius II in 355 and in this role campaigned successfully against the Alamanni and Franks. Most notable was his crushing victory over the Alamanni in 357 at the Battle of Argentoratum (Strasbourg), leading his 13,000 men against a Germanic army three times larger. In 360 in Lutetia (Paris) he was proclaimed Augustus by his soldiers, sparking a civil war between Julian and Constantius. Before the two could face each other in battle, however, Constantius died, after naming Julian as his rightful successor. In 363, Julian embarked on an ambitious campaign against the Sassanid Empire. Though initially successful, Julian was mortally wounded in battle and died shortly thereafter. Julian was a man of unusually complex character: he was “the military commander, the theosophist, the social reformer, and the man of letters”. He was the last non-Christian ruler of the Roman Empire, and it was his desire to bring the Empire back to its ancient Roman values in order to, as he saw it, save it from dissolution. He purged the top-heavy state bureaucracy and attempted to revive traditional Roman religious practices at the expense of Christianity. His anti-Christian sentiment and promotion of Neoplatonic paganism caused him to be remembered as Julian the Apostate by the church. Ironically, he was the last emperor of the Constantinian dynasty, which was the empire’s first Christian dynasty. The item “JULIAN II 361 AD Authentic Ancient Roman Pedigreed GOLD SOLIDUS Coin NGC Ch XF” is in sale since Wednesday, May 25, 2016. This item is in the category “Coins & Paper Money\Coins\ Ancient\Roman\ Imperial (27 BC-476 AD)”. The seller is “victoram” and is located in Forest Hills, New York. This item can be shipped worldwide.