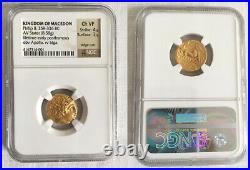 Philip II (359-336 BC), King of Macedonia and father of Alexander the Great. Flying Nike right under horses. Macedonian Kingdom, AV Stater (17mm, 8.58 g, 7h). Philip II 359-336 BC. Le Rider 358 (D157/R269); SNG ANS 157-9; lifetime-early posthumous. Obverse: Laureate head of Apollo right. Reverse: Charioteer driving biga right, below Nike flying right. Graded and Encapsulated: NGC. Ch VF; Strike: 4/5; Surface: 3/5; edge cuts. This is a beautiful coin to add to your collection. The coin was graded, encapsulated and guaranteed genuine by NGC grading service. If for any reason a return is allowed, the coin must be received in the condition in which it was sent — unopened, untampered with, and secured in its NGC holder. If the coin is tampered with, in any way, shape or form; removed from; or attempted to be removed from its holder, then absolutely any implied or stated guarantee is void and the coin will not be accepted in return!! We are not responsible for international postal or custom delays, losses, or damage. Thank you and good luck! The item “Macedonian Kingdom, Philip II (359-336 BC) Gold AV Stater, NGC Ch VF a gem coin” is in sale since Tuesday, January 28, 2020. This item is in the category “Coins & Paper Money\Coins\ Ancient\Greek (450 BC-100 AD)”. The seller is “fore1327″ and is located in Georgia. This item can be shipped worldwide.