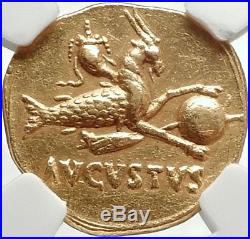 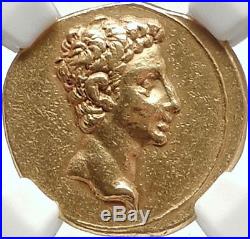 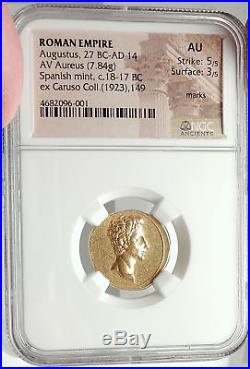 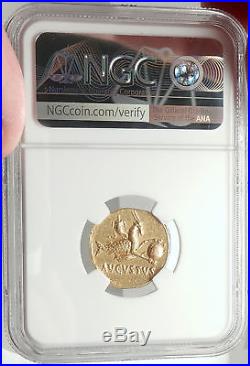 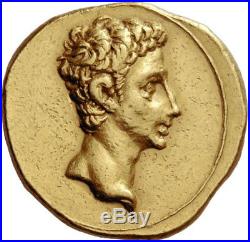 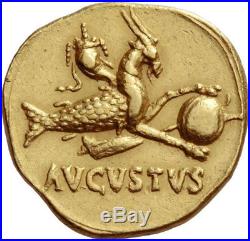 [6611] Octavian as Augustus, 27 BC – 14 AD. Gold Aureus (7.84 grams), Colonia Patricia? Mint circa 18-17/16 BC Reference: C 20. Calicó 164 (this coin). Faces of Power p. Pedigree / Provenance : Ex Canessa sale 28 June 1923, Enrico Caruso Collection , 149; Christie’s 9 October 1984, Property of a Lady, 2 and Sotheby’s 7 March 1996, 148 sales. From the Victor Adda collection. Certification: NGC Ancients AU Strike: 5/5 Surface: 3/5 4682096-001 Bare head right. Capricorn right, holding globe over rudder; above, cornucopiae; below, AVGVSTVS. A bold portrait struck on a very broad flan and a lovely light reddish tone. The brilliantly executed portrait used for this aureus was created by a master engraver not long after Gaius Octavian – the adopted son of Julius Caesar and victor over Antony and Cleopatra – assumed the title of Augustus and became the first Roman Emperor. This idealized and classicizing portrait type was Augustus’ preferred personal image for coins and statuary in the early years of his reign and influenced such iconic representations as the Prima Porta Augustus. The title DIVVS FILIVS son of the god i. Julius Caesar had loomed large during Octavian’s propaganda war against Caesar’s assassins and later against Antony, but it disappeared from coin inscriptions after he became Augustus. Nevertheless, while the words may have vanished, the idealized beauty of the portrait still managed to convey the Emperor’s transcendence and his quality as something greater than a mere man. The reverse type is the personal seal of Augustus, representing the zodiacal sign with which he was closely associated. It is often described as the sign of his birth on the morning of September 23, 63 B. But there remains some scholarly controversy over whether it actually represents his rising or moon sign, since his sun sign was actually Libra. According to Suetonius, the sign of Capricorn became important to the future Augustus already in 44 B. Just after the murder of Caesar. At this time, he and his close lieutenant, Marcus Agrippa, had their horoscopes cast by a Greek astrologer. Agrippa went first and had amazing things predicted of him. Octavian feared that his future could not possibly be as impressive as Agrippa’s and initially resisted having his horoscope cast, but when he relented the astrologer bowed and recognized him as the future master of the Mediterranean world. This recognition is indicated by the globe and rudder associated with Capricorn here as a sign that Augustus’ star-sanctioned power extended over both land and sea. In addition to Suetonius’ anecdote regarding Capricorn as the herald of Octavian’s destiny to become Augustus, the first Roman Emperor, it has been suggested that Augustus had further propagandistic reasons for advertising this zodiacal sign. Capricorn had some association with stern moral authority, which tied into Octavian’s attempts to contrast himself with Antony – usually characterised as debauched and corrupted by eastern luxury – and to his desire, as Augustus, to reform and cure the perceived moral ills of Roman society. Capricorn was also associated with the planet and god Saturn. According to Roman mythology, Saturn lived in Italy for a time after he was driven from heaven by Jupiter. His reign on earth, later celebrated in the revelries of the Saturnalia at the winter solstice, was considered a golden age of happiness for mankind. The reign of Augustus was cast in a similar golden Saturnian light by no less a figure than the poet Virgil. Provided with certificate of authenticity. CERTIFIED AUTHENTIC by Sergey Nechayev, PhD – Numismatic Expert. The item “AUGUSTUS 18 BC Authentic Ancient Gold Aureus Coin CAPRICORN Caruso Collec NGC AU” is in sale since Saturday, October 28, 2017. This item is in the category “Coins & Paper Money\Coins\ Ancient\Roman\ Imperial (27 BC-476 AD)”. The seller is “victoram” and is located in Forest Hills, New York. This item can be shipped worldwide.